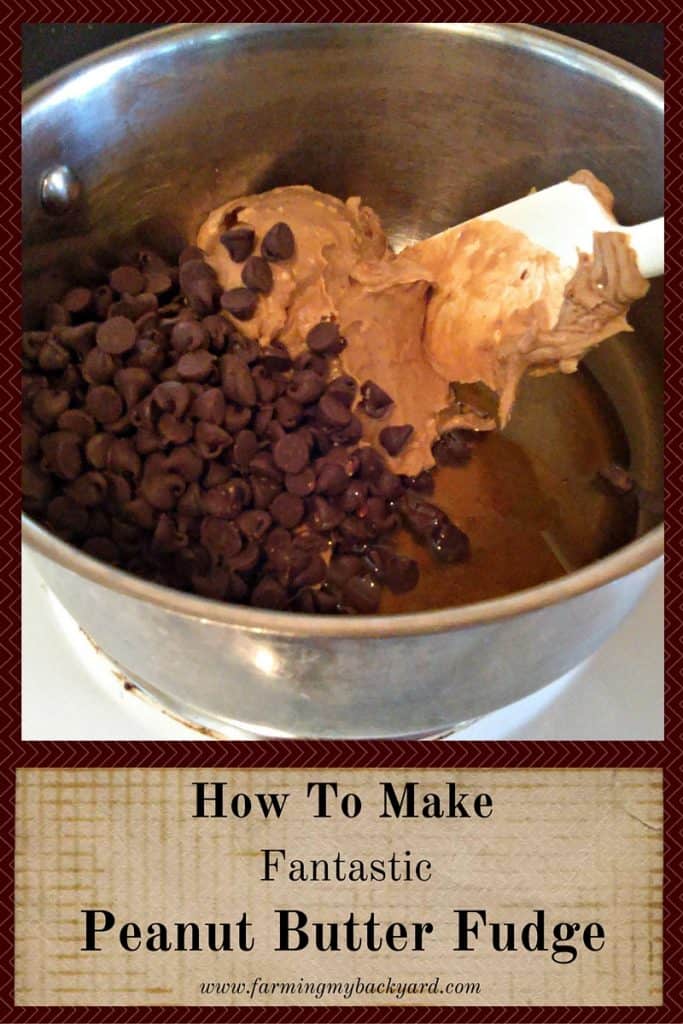 Chocolate is awesome.  I mean just about everyone can agree that it’s just amazing.  Except my husband.  Because he is really weird.  He does not like chocolate!  I totally don’t gt it, but he doesn’t.  He does however like peanut butter, and he can put up with chocolate as long as there is some peanut butter involved.  The four year old also does not like chocolate (weird child), but she DOES like this peanut butter fudge.  That’s because it’s even more awesome than chocolate because it has chocolate AND peanut butter.  YUM.  This recipe originally came from Heavenly Homemakers Peanut Butter Honey Fudge recipe, but that one wasn’t quite chocolaty enough for me, so we tweak it a little around here.

Some day the plan is to make this from our own honey, but the day we get bees is still VERY far away. Now if we could plant a cocoa tree that’d be something else. 😉 This isn’t a totally homegrown recipe, but I like to make it when I’m craving something wrapped in plastic.  It’s one of my favorite ways to reduce waste!

This looks so easy and delicious. I can't wait to try it. Thanks for posting on the #WasteLessWednesday blog hop.

It is! Definitely give it a try.

I can tell from this post, We could be good friends! Lol, is there anything better than chocolate fudge and coffee? I think not! Thanks for sharing on the Homesteader hop!

I am thinking BOTH! Honey AND Marshmallow creme....

Try it and let us know if its awesome. :)

Oh my gosh, this totally reminded me of that time in GATE when I created my own fudge recipe using equal parts of chocolate chips, peanut butter, and marshmallow cream. Basically prepared the same way as this recipe. I'm sure honey is better for you though. :)

Oh yeah! Now I have to go make it with marshmallow creme.