Thinking about adding more chickens to your backyard flock?  Make sure you know how to properly integrate new birds into the existing flock.  Introducing new chickens can be easy, or it can end in a very sad way.  Make sure your birds stay safe by following these tips: 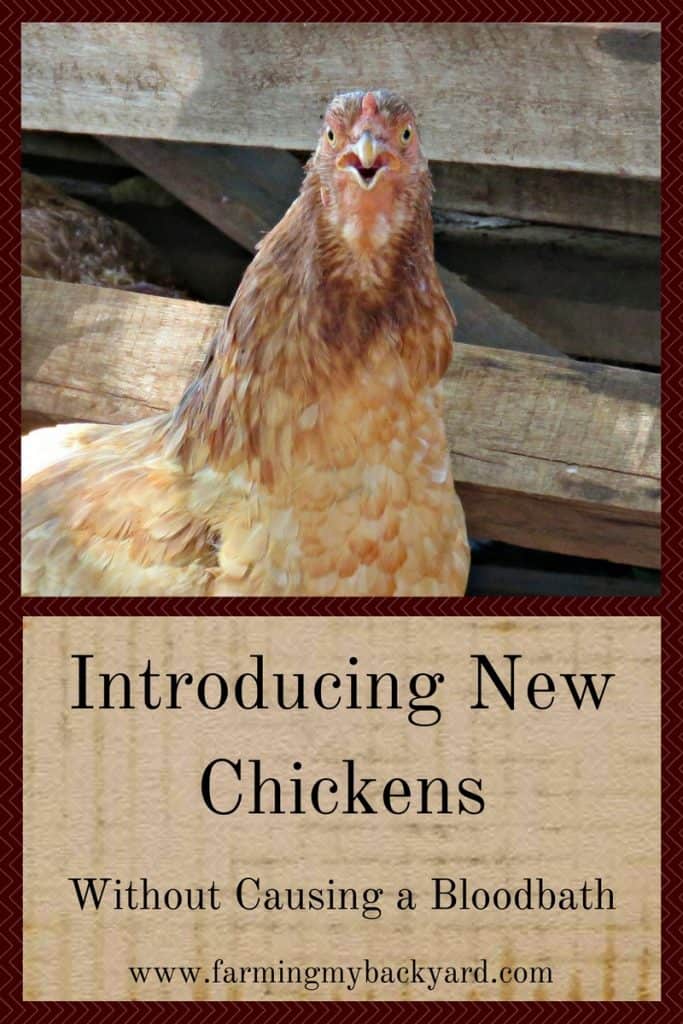 All new animals should be quarantined before you introduce them to your existing livestock.  Chickens are no exception.  Keep your flocks separated for a month, and make sure to wash your hands if you go between flocks so that you don’t carry any bacteria.  One sick newcomer can take out a whole flock, so while it can be a pain in the neck, especially on small properties, it’s really important.

If your new birds haven’t shown any signs of lice, mites (scaly legs), fluid from the eyes or other symptoms of illness go ahead and move onto the next step.  If they do, get them healthy or put them down.

Separate Them But Let Them See Each Other

At this step, the two flocks can see each other, but they are separated by a fence, chicken wire, hardware cloth, or a crate or pen.  Each flock has it’s own space, feeders, and waterers, but they aren’t totally separated any more, and can start getting used to each other without the ability for anyone to get hurt.

Keep the newcomers in eyesight for a week or two.  If you are introducing chicks to already grown chickens, wait until the chicks are roughly the same size as your adult birds before moving onto the next step.

Before you put all the chickens in the new pen, make sure there is enough space for all the birds.  Crowding can cause major problems.  It’s also a good idea to add a few hiding places for any picked on birds to escape.  Branches and other things to roost on are good options.

Put in extra feeders and waterers.  The more dominant birds will chase the newcomers away for awhile, and you don’t want them to go hungry.

Side note: My favorite style feeder and waterer are simple rubber pans.  The larger pans are good for water, and are easy to clean and get ice out of in the winter.  Gravity waterers are always dirty, and those huge gravity feeders turn into a neighborhood rat buffet.  The smaller rubber pans work great for feeding a daily ration and are easy to clean up at the end of the day.  Click here to check them out.

Also make sure there is plenty of entertainment.  Bored chickens are not nice to each other!  You can hang a cabbage to peck at, throw in plenty of weeds, leaves, or straw to scratch around in, or rearrange their coop so that they all are adjusting to a new space at the same time.

Chickens will peck at each other as they establish their new hierarchy.  Your job is to make sure that it doesn’t get out of hand.  If there’s blood or missing feathers pull the injured bird out and separate them immediately.  If one bird is overtly aggressive you can pull it out for a few days and then re-introduce it.  It will be more likely to settle in to a new spot in the pecking order.

If the birds just don’t settle down after a few days, go back to a separate pen for the new flock.  Make your run larger before introducing them, or have them free range the next time you put the two flocks together.

Sometimes there’s just a chicken that is a bully.  If the new birds are getting enough to eat and aren’t showing signs of bleeding or feather lose it is most likely normal.  Just make sure to keep multiple feeders and waterers out so everyone gets enough to eat.  Alternatively you can rehome that bully to the soup pot.

I had just 2 chickens and lost one. we got 2 more to integrate they are 1 year old about the same size as the one existing chicken I had left who was not receptive to them she just keeps chasing them all around the pen enclosure i tried free ranging them together and she runs across the yard to chase them, as if she is claiming every foraging spot as well as every food container etc. we bought a 2nd coop to keep them seperate and hopefully eventually put them all in. the problem is the bully keeps trying to get into the new coop is very curious peers at them through the open door. she did get in there at one point while they were out in pen and she immediately claimed a nesting box and made a space for herself. I am not sure at what point I can try to let them all in the coop together. I don't want her to chase them out of their coop and make them afraid to go back in at night.

If it's just the three of them, I would let them work it out with plenty of space and feed. They will need to establish their pecking order. Just step in if they are seriously injuring each other, and eventually they will be able to roost together.

I lost a chicken to a predator from a flock of just 2. I was worried about the mature 5 year old being alone, so i wanted to introduce a new chicken within the week. Couldn't find any mature chickens available for sale so i went with a pullet. First meeting together in pen, not good, mature chicken pecking and bullying smaller chicken. Eventually separated and decided I will establish a new coop and run for the new chicken and add a couple more so she isn't alone and see if time will change the mature chickens habits over time and as the pullet gets larger. So appreciative of all the previous comments and experiences. Very helpful in deciding my next steps. Thank you.

Yes, once the size difference decreases they should do better together.

I have a 1/2 arcre for 7 chickens. There is a 4 ft. fence and a small run with the coop. When I introduce new chickens they are kept in a separate coop at night and in the run during the day. The older chickens can see the news ones from the chicken yard. After a few weeks I let all of them in the yard during the day and still keep them separate at night. Soon all the chickens will go in the big coop at night on their own. I don't have any roosters so I really haven't had much of a fuss. Just the pecking order established between the 2 hens that were in charge of their flock. This has worked well for 8 years.

That's awesome. Thanks for sharing!

I have a situation of four chickens that I hatched. One is a pekin , two a silky serama silver laced Wyandotte . One being a white cockerel. The fourth has just hatched four chicks two weeks ago. I am hoping for them all to live together in an aviary with the coop inside. How can I achieve this?

If they have enough room the mama will defend the chicks. If not, just wait until the chicks are close to the size of the adults before putting them together.

I recently acquired one girl who was a science school project. She lived in a tote in a shed for most of her short life. So she has no chicken skills. I would like to introduce her into my flock of 11 girls after 2 weeks. Should I put my 2 lesser girls in her run. Or just open her gate and just let things happen. Thank you

Yes, let her and a couple other hens get used to each other first.