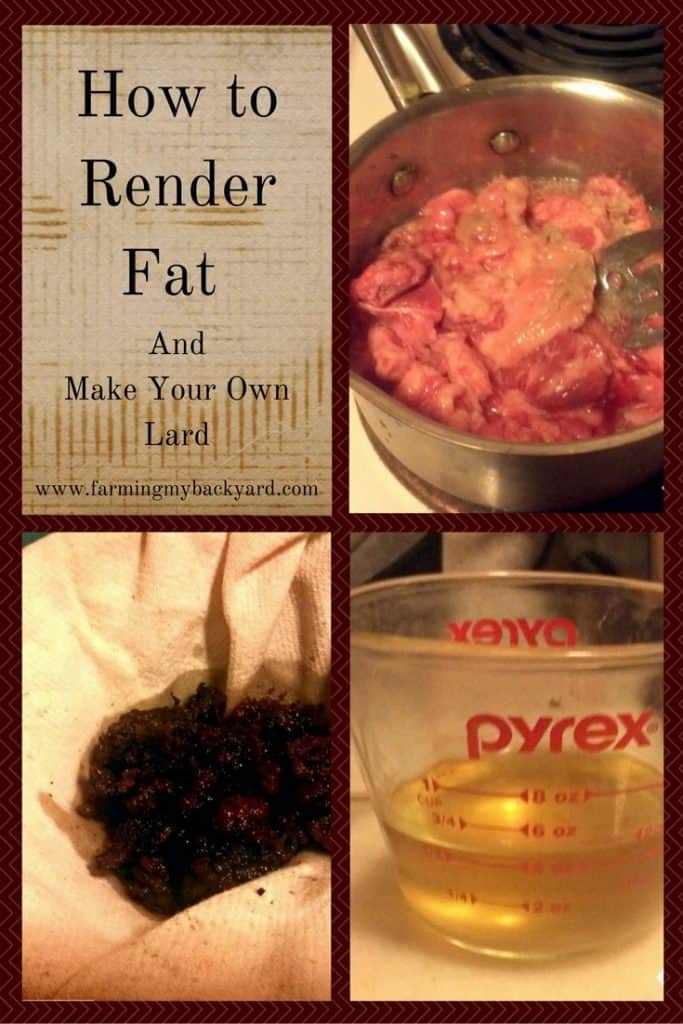 The other day I was getting ready to put a fatty roast into the crock pot when I realized I should learn how to render fat.  It sounded like something worth doing, but I had no clue how to start.  Thankfully it turned out to be easy.  We are all trying to eat more whole foods, and when meat is part of your diet, that means you will have more fatty meats.  Don’t let that lovely fat go to waste!

Here are the simple steps to render fat at home:

Cut The Fat Off the Meat

Kitchen scissors probably work best.  I didn’t have any on hand and just used a utility knife.  Try to get as much of the fat off as you can.  It doesn’t matter if it’s small or large chunks, as it will all get melted down in the next step.  If you want, you can save the fat in the freezer until you have enough to render fat in a big batch.

Place your fat into a pan and add enough water to cover the fat.  Heat, stirring occasionally.   The fat will melt and the impurities and bits of meat will fall to the bottom of the pot.  The water will burn off.  It’s main purpose is to keep the fat from burning as it heats up.

Strain the cracklings and impurities through a cheesecloth.   These are good to eat.  Remember Laura Ingalls Wilder in Little House in the Big Woods?  She loved the cracklings from their hog butchering day. I thought they were delicious.  My husband didn’t like them.  I supposed if you don’t like them, then cats, chickens, or dogs would be more then happy to dispose of them.

Pour the melted fat into jars for storing.  It will be golden as a liquid and turn creamy white as it cools.  Congratulations!  You now know how to render your own fat!

Rendered tallow and lard is great for high heat cooking and soap making.  They make some pretty amazing french fries, and rendered fat would be an excellent choice for homemade tortillas.  You can also use your lard and tallow to make homemade soap.

P.S. It can be fun to make your own lard and other foods, but sometimes when it comes to meal planning, it can get rather “blah”
If that happens to you, check out the Healthy Meal Planning Bundle.  With meal plans and cookbooks, you don’t have to think about what’s for dinner, which means more time for DIY-ing!