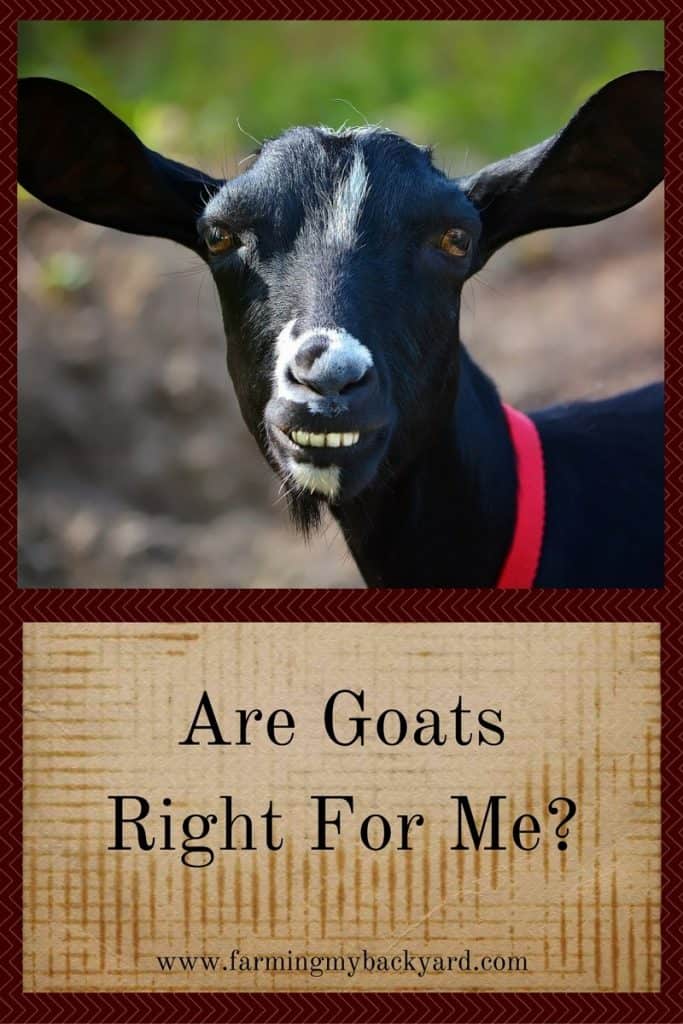 Are goats right for me? I thought I was in love with my goats, but now I’m not so sure. I have visions of selling them and planting fruit trees in their yard right now. Even my goat-hating husband said I should take some time to think when one evening I wanted to put them all up for sale along with their manger, shed, and cable spool. I turned to my fellow homestead blogging friends, and got a lot of great suggestions, as well was moral support with whatever I do decide, but I’m still up in the air. My husband says I need to downsize this year’s babies before I sell my two does. Which makes sense, I guess. There ARE things I love about them. A lot of things. But there are also some things I hate. And then there are things in between that I could probably live with, but make me wonder if goats are right for SUCH a small, urban homestead.

How about you? Have you ever added an animal to your home or homestead and then realized it wasn’t like you expected? Have you ever thought you wanted to raise animals one way, then later find out you’d rather do it differently?

Update: Ten months after writing this post I did end up selling my goats.  I miss them, but introverted me appreciates having less stress.

Here are all the things I love about my goats:

Their personalities. Despite their dorky names (Snow White and Aurora, thanks three-year-old!) I really love THEM. Snow White has this sweet way of snuffling the back of my legs when she wants me to feed her some apples. Aurora is a scaredy cat, but she likes to bluff by pretending she’s tough and head-butting everything. But they trust me, and I really enjoy my time with them every day. Even when I’m not out milking its fun to just watch them play, relax in the sun, and the kids love feeding them bits of dandelions or other treats when we’re out playing in the back yard.

The babies. Baby goats are the cutest thing EVER. I think my heart just sings a little bit every time I see a baby goat jumping around on its tiny little stick legs.

The milk. This milk is AMAZING. It’s seriously the best milk I have ever tasted. It’s thick and creamy, and because I pop it into the freezer right after milking it’s not at all goat-y (unless I miss a goat hair when straining. EW!). I’ve never found anything that’s comparable in deliciousness. (Although bacon is a close second). Plus, even right now with two babies left and not locking them up at night I’m still getting close to two gallons a week of milk. That’s pretty awesome considering the amount of space we have, and my less than perfect goat-raising skills!

Raise Goats In The City!

Imagine pouring yourself a cold glass of milk, that you raised yourself! You can raise goats even if you don't live in the country. Find out how in the free email crash course on raising goats in the city.

But there are some things I really hate about raising goats too.

Disbudding. Ugh. Hate it. And I’ve never even personally done it! I hate thinking about it, finding someone to do it, being afraid every year that I can’t get someone out here and I’ll have to figure out how to do it and screw it up. And I already DID screw it up. This year I waited WAY too long and it was so much more awful for the babies. I just feel like the most horrible human EVER when I think about it.

Finding a buck. I’m like a nervous wreck every time I have to find a suitable buck. Do I take my goats there? Have him come here and bring lots of eggs to the neighbors to apologize to the smell? Are my CAE/CL tests all in order? Am I being rude by asking for the buck’s tests results?

Yearly testing/shots. Eeek blood! I just don’t think I’m cut out to be a goat owner. Needles makes me sick to my stomach. Once again, I stress out about getting someone out here to do it for me, or doing it myself. Once again, you’ll finding me freaking out scouring craigslist and writing and re-writing emails (Hmm, I’m noticing a theme. Apparently, I don’t mind goats, just humans).

Selling the babies. I just don’t have the space to keep them long term. The intention was to raise the babies as pets, but this year I didn’t get enough time to really socialize them and it showed. I probably should have kept them for meat instead, but by the time I realized it I just couldn’t do it. I’m such a wimpy, city girl.

And A Few Things That Are Mildly Obnoxious

Worrying about them being cold at night. Once again, this falls under wimpy city girl problems, but I feel SO guilty about sitting in front of my nice warm fire that I’ll obsessively go traipsing outside several times each night to look for indications that they are chilly. But then I’m cold, and they just stand there in their warm, furry goat coats looking at me, saying “Did you bring snacks?”

Buying hay. I hate the way it gets all over my car. I hate that we are paying $30(!!!) a bale because we just don’t have time to go out to the cheaper feed store, or store it in bulk here at the house. I bring the goats plenty of treats, but I wish they had a pasture for them, for me, and for my husband’s sanity when doing the finances.

Being tied to the house. Milking every day, twice a day gets really old, really fast. Sometimes I just want to stay in bed. Sometimes I have visions of going to visit my parents in another state, spur of the moment. Then I remember I have to plan it all out a year in advance to correspond with breeding, drying off, and kidding. Sometimes, I’d like to just go out for the day, lose track of time, and not have to remember I have some very full udders waiting for me to come back.

A lot of these problems have really awesome solutions. Unfortunately, a lot of the solutions require more space. And more space is not an option right now.

The simplest solution would be to just keep the goats as pets. I get to enjoy them without any of the stress of managing them as livestock. And believe me, I WOULD, but they take up half of our entire back yard. It’s a big commitment percentage wise. And then there’s the cost factor for all that hay. I don’t even have blackberries I can let them loose on for “pasture” and feed savings because we’re so tiny.

The being tied to milking has an easy solution too. Keep the babies longer and just leave them with the does when I don’t want to be tied down. But yeah, space.

Worrying about the cold or the aesthetics of having a city goat yard? My husband really wants to build a super cute, insulated mini barn, but I’m not sure I want to dedicate that much…you’ll never guess…drumroll please…SPACE to a permanent structure.

Don’t like tracking down a goat sperm donor every year? Keep your own buck! Oh wait, that takes space.

Hiring someone to do the disbudding, blood draws, and shots wouldn’t be such a problem if I wasn’t SO SHY. But it’s very, very much outside of my comfort zone no matter what I end up doing. It seems like such a silly thing, but this may ultimately be the thing that is a deal breaker to goat keeping for me. If I got really good at these things it wouldn’t be so hard, but getting good requires practicing when I’m not so good. Practicing when you’re not very good is infinitely better with someone guiding you. But I’m just not a people person. People are way scarier than animals.

And then I don’t have to sell the babies. I could keep them (SPACE!) or I could raise them for meat. Unfortunately, I don’t really know much about raising goats for meat. I read through Storey’s Guide to Raising Meat Goats quickly a few years ago when I was still trying to decide if I should get goats, but I don’t recall very much of it now. (I highly recommend Storey’s Guide to Dairy Goats, and referred to it often).  The idea definitely appeals to me, and maybe it would knock enough off my bad list that the good list doesn’t seem so outweighed. If I raised them for meat, I could be less tied to milking throughout the year, but still be able to balance the cost of keeping them with the savings in food.

I don’t know if goats are right for me. They certainly have some great aspects to them. Even if I do decide to sell I won’t regret having had them. But I feel like given my personal stress over management, plus the small space we have, maybe it’s just not the best choice.

How do you make difficult animal decisions?

Update: I Sold My Goats

I spent the ten months after writing this post trying to figure out ways to make the things I didn’t enjoy less of a big deal.  We went to once a day milking. and sold the two babies I still had from the last breeding.  I prettied up their yard and shed.  I bought a big tarp for the car.  But finally I just had to admit that I didn’t have the space to manage the goats the way I really wanted to.  If I had enough space to keep my own buck, keep a closed herd, rotate pastures, and raise them for meat and milk I would have made a different decision.  I could see myself getting goats again if we had a different property.  I’m glad for the experience, and I still think goats are an awesome asset for some small homesteads.

14 thoughts on “Are Goats Right For Me?”