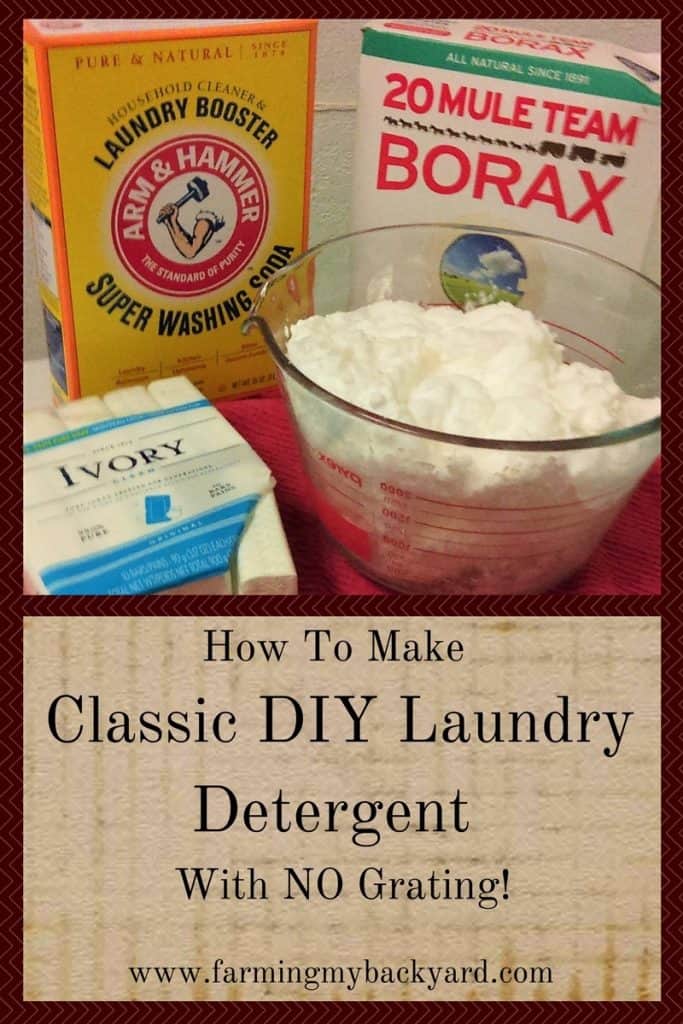 We’ve all seen the numerous recipes over the years for DIY laundry detergent, and they seem to be a love it or hate it thing.  When I first tried it I decided that I hated grating soap and soap nuts were a much better option.  (Read more at How To Use Soap Nuts For Eco-Friendly Laundry).

However, eventually I needed something even cheaper than soap nuts.  I gave grating another try, especially because it was for a liquid recipe that made a TON of detergent.  I figured I could grate soap for one afternoon if it meant dirt cheap laundry soap for the next few months.  And to my surprise those 5 gallons of homemade laundry soap worked pretty darn well.

I used to love my DIY laundry detergent…

Well, hard water and soft water are COMPLETELY different when it comes to using DIY laundry detergent!  The liquid didn’t work as nearly effectively in hard water as in soft water.   I was washing exactly the same way, but our clothes smelled a touch funky and didn’t seem to be getting clean.  In an effort to use up the last of the batch I quadrupled the amount of laundry soap used, and it helped a bit.

However, now that left me with a puzzle.  I could have just bought a bag of soap nuts and called it a day, but I was intrigued by the puzzle, and not anxious to increase my laundry budget after it was so insanely low for months.  How could a laundry soap that previously worked so well be such a different beast in hard water?

It was time to dive into a bit of laundry science.  (Never would have guessed that was a thing, but it totally is!)

Both soaps and detergents are surfactants.  This means they reduce the surface tension of water and allow it to penetrate your clothes instead of beading up.  Surfactents also loosen soil in clothing and hold it in suspension in the water until it can be rinsed away.

Well, it turns out that the minerals in hard water such as calcium and magnesium react with soap to create soap scum and buildup.  Because of that reaction, less soap is available to act as a surfactant.

This means that in hard water you will need to use more soap than you need in soft water.  This ultimately is why I believe the liquid soap didn’t work for me.  Having it diluted by water just didn’t have enough cleaning power.

Use a powder instead

Some more research showed that I could make a couple adjustments, and the first one is to use the powdered version of the classic DIY laundry detergent recipe.  The only downside here is that I prefer easy, and grating soap is NOT easy.  I was willing to overlook it when the liquid soap made such a huge batch.  Unfortunately, the dry version is not quite as prolific.

Luckily, I stumbled across an awesome solution when trying to find random interesting stuff to keep my kids entertained!  Happy Hooligans mentioned that they make expanding ivory soap in the microwave, and then use the puffy soap for their laundry!

I set my kids loose with soap and a microwave and they had a blast.  Next up was making the laundry soap.

How To Make Classic DIY Laundry Detergent With NO Grating!

The dry version isn’t as economical as the wet version, and if you have hard water, you might even need to use more than 1/3 of a cup depending on the size of your load.  This detergent works best in hot water, but I’ve had no complaints when washing my lightly soiled loads on cold.

Is this REALLY laundry detergent?

After it’s rinsed away both soaps and detergents eventually biodegrade in oxygen, hydrogen, and carbon molecules and the minerals.  Detergents take longer to degrade than soaps do, plus they often have phosphates or dyes that don’t break down, but rather go back into the environment either highly diluted or as part of an inorganic sludge.

However, detergents are generally more effective for laundry done in hard water, as they do not combine with the minerals to create soap scum.  You can also use Sal’s Suds or Dawn in place of the ivory which would make it truly a DIY laundry detergent.  (Technically this recipe is a soap).

Here’s why you need the washing soda

The washing soda reacts with the minerals in hard water and makes them insoluble in the water so they can’t attach to your clothes.  During the rinse cycles those insoluble minerals will be washed away with the water.  Washing soda also has a high PH which makes it a good degreaser and stain remover.

Without it or a similar product you will get the minerals building up in your clothes, and they can even trap the soap molecules as well.  This creates buildup eventually, and can lead to your clothes acting like mine did with the liquid soap.  Funky, and not in an awesome way.

Here’s why you need borax

The borax has a simliar effect to washing soda, although not as much.   Borax is generally safe as long as you don’t eat it or rub it all over your skin or put it in your eyes.   However, if you are going right to a grey water system it might be better not to use it.

Borax does break down into hydrogen peroxide, like oxyclean, and can help whiten clothes.  It is not as critical as the washing soda, and some people have reported that they make their DIY laundry detergent without using the borax at all.  This is something you may want to experiment with and see if it works for your particular water and laundry needs.

When I first sat down to write this post I poked around and did a little reading.  I was shocked to discover that apparently making your own laundry soap is now controversial.

Obviously it’s not going to work for everyone, because honestly NOTHING works for EVERYONE.  However, there did seem to be quite a bit of misinformation running around online.  Imagine that!!!!  (I wish there was a sarcasm font…)

Will soap make your clothes oily?

Some people talk about soap being made from oil, and thus causing an oily build up.  When fat or oil and lye are combined, they saponify, and don’t have oil or lye left.  (Read more at How To Make Homeade Soap From Ashes).  That’s why you don’t give yourself chemical burns from the lye when using soap!  Some soap makers will add other oils into their mix for extra moisturizing and things like that, so just don’t pick those types for your homemade laundry soap, and you’ll be fine.

How do I get my whites so white they blind you when you look at them?

Fancypants laundry detergents have a bunch of extra stuff added in such as bluing and optical brighteners to make white clothes seem whiter than they actually are.  Personally, I’ve never found those sorts of soaps to be worth the money and thus have never used them.

Here’s a novel thought, don’t buy white clothes that need tons of special treatment!  But if you just LOVE your white pants (crazy person, cough cough) you can still save money even if you buy a fancy detergent just for your white loads.  Also, drying your clothes in the sun can help your whites stay whiter.

Will I have to strip build up out of my clothes?

Those posts all seem to come with super scary looking pictures of black water full of gunk people discovered was in their clothes.  Well, having had done plenty of laundry with a range of different detergents, I’ll let you in on a little secret.   When you let your clothes soak they make the water really, really nasty looking!  (Read more at How To Hand Wash Your Clothes To Save Money).

If you’ve never hand washed your clothes before it’s a bit of a shock just how dark and murky the water looks.  Part of that is the dyes coming out of your clothes.  You can have scary colored water even when your clothes are perfectly rinsed or freshly washed.  We don’t generally go and look at the rinse water in our washing machines, but if we did, it would be quite shocking no matter what product we use.

Can I wash diapers with this?

For washing diapers, there’s a huge amount of controversy.  Pretty much every product has someone out there who insists it will not work, isn’t strong enough, or leaves a residue.  Personally, I find it depends more on the diaper you are using.  If you use flats, you can wash them in a muddy puddle, hang them to dry on a tree, and they’re just as absorbent as they ever will be.  Flats are EASY to wash.

If you have a fancy schmancy microfiber diaper that costs $15 for one, it will probably ONLY be happy with the most inconvenient, expensive, specialty detergent.  I’ve used those kinds of diapers and followed all the specialty washing directions, and they’re just a major pain in the neck and more trouble than they’re worth.

If you use prefolds, (which in my opinion are the best diapers for being quick to put on, easy to wash, and decently priced) you will need to do some personal experimentation.  Often many times people don’t use ENOUGH detergent on their diapers and it causes problems with ammonia and stinky-ness.

I have used DIY laundry detergent on my diapers and find it works well for a while.  If they seem to be slightly less absorbent I will strip them with Dawn to remove any potential residue and then return to washing as normal.  I’m happy with that, but you may come to a different conclusion.

Make It Work For YOU

Any time you take personal ownership of an aspect of your life there is a learning curve involved.  I enjoy learning about how things work in my household and fiddling around to find DIY solutions.  Some people hate trial and error and just want magic potions straight out of a bottle.

Making your own DIY laundry detergent isn’t going to work perfectly for everyone.  It may take some tweaking to come up with the ideal recipe for your personal circumstances.  I thought liquid was the way to go until our water composition changed.   I had to adjust to make it work for me.

Hopefully, you will be able to tweak the available recipes and find one that meets your needs as well.

3 thoughts on “How To Make Classic DIY Laundry Detergent With NO Grating!”