Most chickens have some worms, but it isn’t a problem until the chicken becomes overwhelmed with too many.  Then it can cause health issues, decreased laying, and even death.  🙁 Deworming chickens isn’t difficult, but the tricky part is deciding if your flock needs dewormed or not! 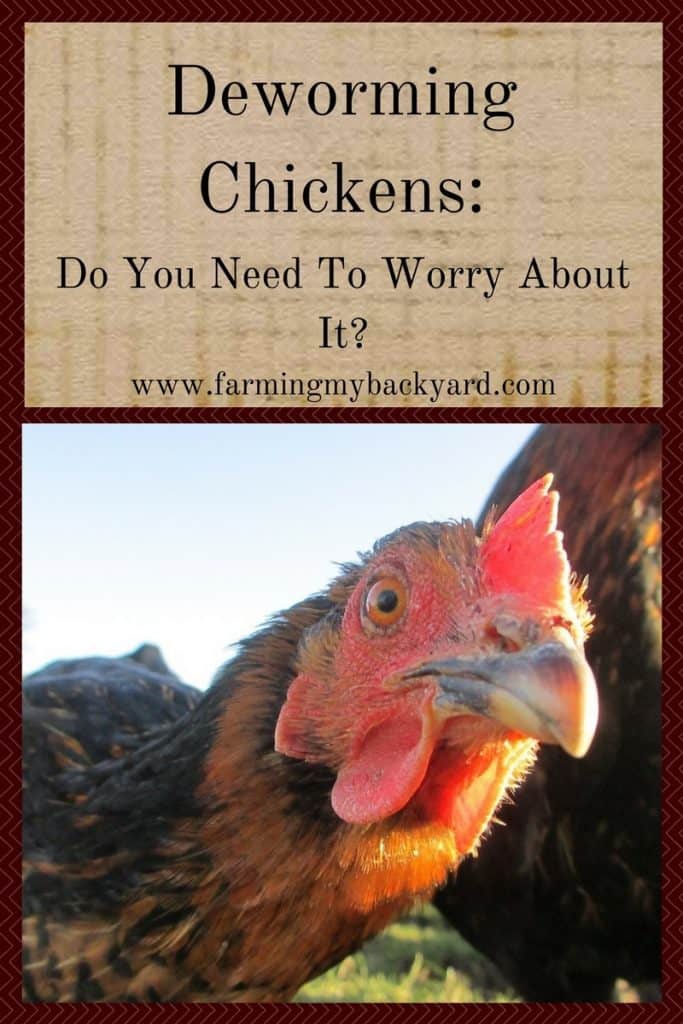 Worms just occur naturally, but there are things you can do to discourage your flock from becoming overwhelmed with too many worms.

Want the best of Farming My Backyard’s chicken wisdom compiled into one easy to read source?  Check out our book, Backyard Chickens: How To Have A Happy Flock!

Chickens can get more worms by pecking at poop that has worm eggs or larvae in it.   If you pen your chickens in the same area, over time the total number of worms in that pen (and in your chickens!) will increase.

Unfortunately, pastured birds can get worms too.  Some species of worms must be eaten by insects such as beetles, earthworms, or grasshoppers.  Then the  chicken eats the bug out on the pasture and becomes infected.

Related Articles On Chicken Wellness:
Be Ruthless With Chicken Mites and Other Obnoxious Bugs
How Do You Know If You Have a Sick Chicken?
How To Clean Your Chicken Coop The Right Way
Can Backyard Chickens Give You Salmonella?
How Can You Help Avoid Chicken Illnesses?
Chicken Diseases You Need To Know About

Kinds of worms that can affect your flock:

There are many species of worms that infect chickens.  Most of them can be separated into two groups, roundworms and flatworms.

Capillary worms are found in the chicken’s mouth, esophagus, crop, and small intestine, but they are too small to be seen without a magnifying glass.

Gapeworm is in the windpipe and respiratory system, which causes the chicken to gape for air, hence the name.

Crop worm is in the crop and esophagus and have signs of droopiness, weakness, lack of activity, smaller appetite.  They involve beetles and cockroaches.

Eye worm is in the corner of a chicken’s eye.  (Sounds AWFUL to me).  If your chicken has it, she will rub and scratch at her eye.  There will also be white cheesy material under the eyelids, and the chicken can even go blind.

Eye worm is carried by cockroaches.  Yuck!  (It is treated with three drops of ivermectin or levamilsole in the chicken’s eye until the worms are gone.)  Plus get rid of those bugs!

Cecal worm is the most common and it’s found in the ceca, which is part of the chickens digestive tract, and are two pouches off of the small intestine.

These can carry blackhead (a bigger problem for turkeys), but are otherwise not an issue.

Signs of tapeworms signs include stunted growth in young birds, as well as weight loss and decreased laying.  You can also see bits of worm segments in droppings when it gets really bad.

Chickens get these when they eat infected flies, ants, beetles, earthworms, slugs, snails, or termites.

Dewormers aren’t very effective on tapeworms, and so the best way to deal with them is to eliminate the hosts for the specific species that is causing problems.

The symptoms are decreased laying, emaciation, diarrhea, and lethargy.

Thorny-headed worm come from wild chickens and causes anemia and weakness.  Chickens can get infected when they eat pill bugs.  Infection is not an issue except for very young chicks.

Controlling worms with medications is, in my opinion, a hopeless proposition.  The more you use chemical dewormers, the more they become resistant.

The best way to deal with worms is to encourage healthy chickens that resist infection.  Make sure they have good nutrition, especially vitamin A, B, and animal proteins.

Keep coops, runs, feeders, and waterers clean.  Rotate your birds on pasture if possible, and make sure not to keep too many birds in one area.

Warm, moist conditions in pens and coops can encourage the development of some infectious eggs.  Ventilation in the coop and keeping the ground dry is super important!

It should also go without saying that if you have a bird that is particularly susceptible to getting worms.  DON’T keep its offspring.

Some vegetables can discourage worms from sticking around when fed to your chickens, such as brassicas (such as cabbage and turnips), and cucurbits (cucumbers, pumpkins, and squash, particularly the seeds).

Garlic is also supposed to be effective.  You can sprinkle garlic powder over their food or add crushed garlic to their water.

Related: Planting Garlic is Easy!  Here’s How To Do It.

These methods won’t get rid of a large worm population, but are better at discouraging problems from developing in the first place.

How Do I Know If I Need To Use Medications?

Some chicken keepers never use dewormers and rely solely on feeding garlic and pumpkin seeds to their flocks.  Then there are others who deworm their whole flock as a matter of course every six months, rotating which product they use.

The only way to be sure that your chickens do not have a unreasonable problem with worms is by doing fecal exams.  You can have a vet do it or you can learn how to do it yourself.

Doing fecals every six months is a good way to be sure that your flock is healthy and that your preventative measures are doing an effective job.

The Chicken Health Handbook by Gail Damerow has an excellent section on learning how to do fecal exams, including a worm egg ID guide.

If this is the route you want to take for your flock, I highly suggest investing in the book as it is a clear and easy to follow guide.

There are also instructions and some pictures on the Backyard Chickens Forum.  There are some as well on Kakariki.net, a parrot keeping forum.

When Deworming Chickens Is A Necessity

When you must use medications, try not to use the same one all the time.  Resistance takes longer to build when they are rotated.

Dewormers are either placed orally in the beak, dropped on the skin, injected under the skin, or added to the food or water.

Piperazin has a withdrawal period of 14 days for meat, but there is no safe period established for eggs.

Hygromycin-B is approved for laying hens.  The withdrawal time is three days for meat.

Do be aware that it is an antibiotic and comes with all the disadvantages and problems that commercial operations have.  Isn’t avoiding that sort of thing part of the whole point of raising our own birds?

Even though they are not approved for chickens, some flock owners use Ivermectin, Levamisole, Albendazole, and Fenbendazole.  The Chicken Health Handbook also has an awesome chart with dosing instructions for all of these dewormers in all their various forms.

If you need to dose your flock, I highly recommend picking it up from the library or purchasing a copy.

Personally, I have used ivermectin for both goats and chickens.  My bantams needed just one drop if ivermectin.  Full size chickens need three drops.  Place it on the back of their neck, as if you were applying frontline to a dog or cat.

Do You Need To Worry?

I wouldn’t let worms become a big stress for you, or even worse discourage you from starting your own backyard flock!

If the birds in your small backyard flock are healthy, active, laying, and otherwise bright eyed and bushy tailed, great!

If you want to maintain a breeding program, raise and sell your own birds, have a larger flock, put the time in and learn how to do your own fecal exams so you can be confident that you have the happiest, healthiest birds.

Great info and advice. I learned a lot and verified that I am doing some things right.

I have been debating either treat entire flock (40+) or only sick ones, one at time. I totally agree that worms are natural to chickens; we cannot eliminate the issue completely.

The question is how to live with worms, and what level of control I want. Same thing goes to Marek's. I have decided to live with Marek's since we live wildbird fly zone. I do get vaccinated chicks, but still get some sick chickens (leaky vaccination.) I don't cull entire flock anymore. It seems like that is a commercial approach where they have biohazard area and clean them before entering each buildings. Marek's lives amoung us anyway for my case.

Our chickens are pasture free in California, and we have a creek in our 5 acer property with wild birds. Reality is there is no way we can get rid of worming issues.

My husband has suggested to treat them annual during low egg production time, rotating meds. Which, I disagree.

Zimecterin Gold (ivermectin/praziquantel) must be hard on chickens already, especially while they are moulting or under high heat (100F.) I also have safeguard, wazine etc to rotate.

I always see more tapeworms in dropping when the gardening season starts. As I shovel, they rush to eat earthworms. Technically, I can deworm all chickens that time. However, I have decided to treat just sick ones shows some symptoms: pale wattle, droopy eyes, hiding under bushes during day time. I keep them in the garage, medicate, and they stay in the cages during egg withdraw time (so that we have access to eggs from non-medicated hens), usually 14 days after second dose.

Some people feed the medicated eggs back to chickens, but I don't. If I do that, I feel like I'm extending thier egg withdraw time. I don't feed the eggs to dogs either. That seems creating med resistance on dogs.

I have been searching for the most realistic, practical, and balanced approach, and found in your article. Worming issue is not to eliminate it completely, but keep it under control.

Thank you very much again. I feel that your article gave me some answers and direction.

Glad to help! It sounds like you've got a good handle on everything.

Hi, I have about 30 chickens which are showing symptoms of eyeworm. Their eyes are shut and I've tried various antibiotics. It didn't work. I've read about Vetrx but it's not available in my country. Please what should I do?

Vet RX or Piperazine would be the best. You can also try to interrupt the eye worms life cycle by keeping your chicken coop and run super clean and keeping bugs, especially cockroaches, out.

There are no studies establishing a safe withdrawal time. People using it off label generally wait 7-14 days or 30 days. But there isn't any research on it yet.

Hi, I’m fostering 2 ducks with my 22 girls ( chickens). Their stool seems to be runny, is that normal or should I give them natural worming remedies.

Ducks do tend to have runnier stool as they ingest more water. If there are no other indicators of a problem it's likely normal.