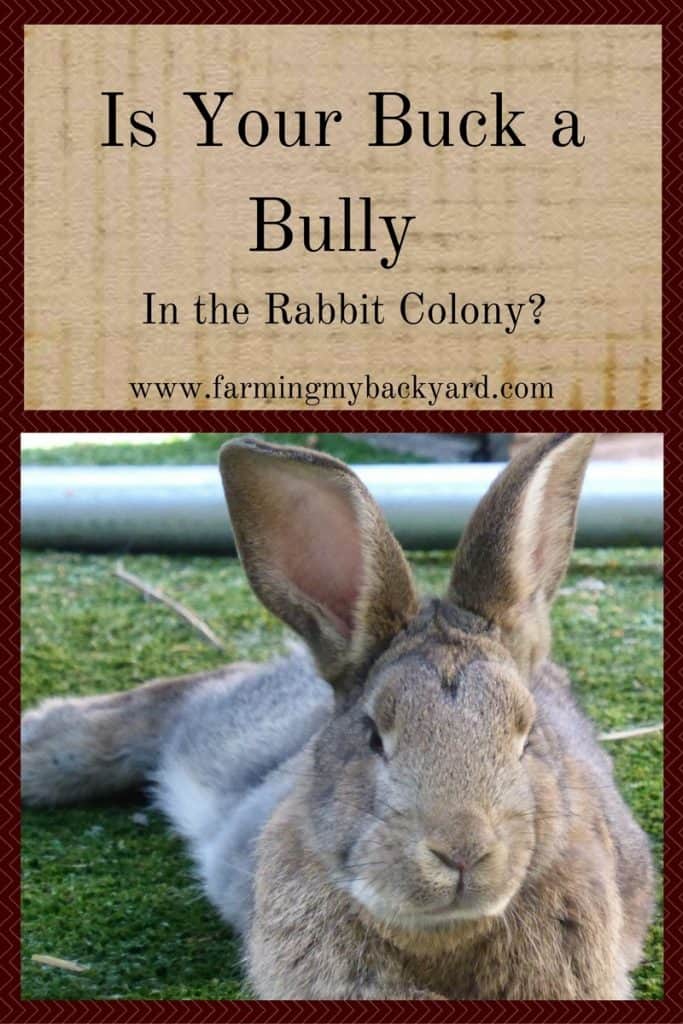 If you keep your rabbits in a colony, you may have some questions about your buck’s behavior.  When people say something breeds like rabbits, they aren’t kidding!  The rabbit buck is anxious to procreate the majority of the time, and he doesn’t always care about the doe’s opinion in the matter.  There are good and bad aspects to including your rabbit buck in your colony.

Should You Put Your Rabbit Buck In a Colony?

I tried our rabbit colony both with our buck Zeddicus and without him.  I prefer having him in the colony because he is able to socialize with the other rabbits.  They do practice social grooming, and enjoy some companionship.  My rabbits were in a colony situation most of their lives, even before I brought them home.  Whether that’s the cause or the effect, I do not know.  My buck didn’t seem to mind the babies.  I would come out to feed them and he would have a couple little ones asleep on his back.  It was pretty adorable, but every time I ran back to get my camera they’d come running up to me for snacks.  Not all rabbit personalities were well suited to a colony, but this is something you can select for when breeding and culling.

Or Should He Have His Own Space?

Some rabbits when kept with a buck will breed back the very day they give birth.  Mine never did this.  They had 2-3 months between litters.  This could have something to do with the fact the colony was located in my garage and didn’t have as many hours of daylight as it would have if it was outside.  The likelihood of fighting increases if you have multiple bucks and too few does they will fight, so send those young males off to freezer camp before they reach sexual maturity at 12 weeks.   Bucks will harass the does a bit.  Mine would chase them around and around in circles.  They were so annoyed with him!  That would go on for a few days and then one or the other would give up and they’d be friends and snuggly and grooming each other.

One issue I did have was him harassing a doe while she was still giving birth.  I had a mis-sexed second buck in the colony with them, so that may have had an influence.  Her nest also wasn’t in a very defensible or private spot.  If you do have your buck in the colony, make sure there is plenty of space, and hidey-holes.  The does will claim and defend these as their own.

What About A Part-Time Colony?

Some colonies include the buck in the center of the colony but in a cage.  He is still able to interact with the other rabbits through his cage, and they can smell each other’s scent, but he cannot breed them.  When it’s time for breeding, let him into the colony for a few days.  This way you can plan ahead and time when babies will arrive.  Another option is to keep him in his own pen.  If you do this, bring the does out of the colony and to him when it’s time to breed.  If you do separate them and the does are not receptive to breeding, you may want to bring him close enough for the does to catch his scent.

Whether or not a buck is included depends on the goals for your herd, as well as the individual personalities of your rabbits.  Do you include your buck or not?  Share in the comments!

16 thoughts on “Is Your Buck a Bully In the Rabbit Colony?”