When people talk about something multiplying quickly they often say breeding like rabbits.  When you first start breeding rabbits sometimes it can be a big surprise when your rabbits don’t breed like, well, rabbits.   Turns out there are several things that can make your rabbits less likely to have a  successful mating.  Here’s how to start breeding your rabbits, and some of the reasons why it might not be working. 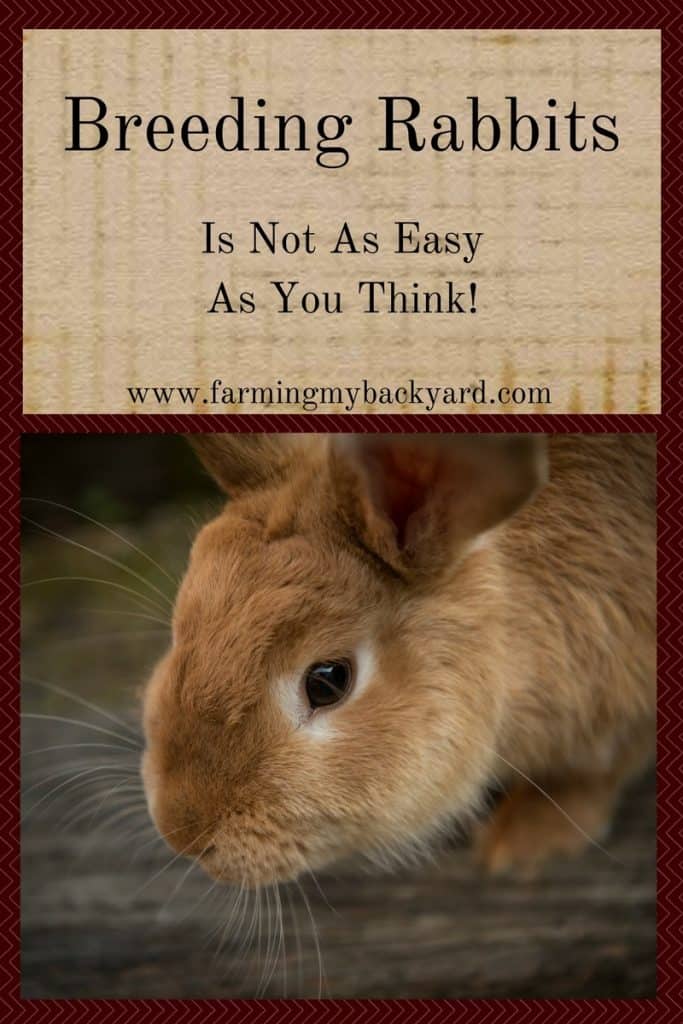 When you want to breed your rabbits, put the female into the males cage.  If the rabbits are housed separately, you ALWAYS bring the female to the male.  Females can be really territorial and may attack the male instead of breeding.   The two rabbits will probably run around in circles for a bit.  If the female is open to being bred, she will lift up her tail, the male will mount her, and then he will fall off onto his side.  The buck should do this  a couple times before you should put the doe back in her space.

You’ll want to watch the whole time, because it can be really quick and you might miss it and then be surprised in a month with babies.  It’s a good idea to bring the doe back to the buck in about ten hours, as the act of breeding stimulates rabbit does to ovulate, so you will increase your chances of a decent sized litter if there is a second breeding.

But sometimes they don’t actually breed

If the female never settles down, try again the next day.  Rabbits don’t go into heat the way dogs and cats do, but they aren’t receptive to breeding 100% of the time.  She just may not be interested on that particular day.  If you’ve tried several days in a row, and she’s still not willing, there may be other issues at play.

Why Won’t My Rabbits Breed?

Here are some common reasons why breeding rabbits isn’t as successful as we expect:

Being overweight is one of the biggest causes of infertility in rabbits.  If your rabbits are a bit chubby, cut down on all the treats!  Get them some more space to run around and exercise.  Then try again when they’ve slimmed down a bit.

When the weather outside is super duper hot, sometimes they just don’t bother.  Also, super hot days can cause temporary sterility (sometimes as long as three months!) in the male.  So when it’s hotter than 85 degrees, if you have a successful mating, but no pregnancy results, it may be the heat.  (Click here for more information on caring for rabbits in the summer.)

Rabbits can be sensitive to day length (just like chickens!).  If you get less than 12-14 hours of light, try adding some extra light in the rabbitry and see if that helps.

First time doe or too long between litters

First time does don’t always know what they’re supposed to do.  Once they’ve been successfully bred they will tend to be eager to bred the next time unless you have very large spacings between your litters.  Does in the wild can breed the same day they give birth, and baby rabbits wean at about 4 week old.  Not all breeders practice such close spacing with their rabbits, but if you are having problems with no other apparent cause, it may be worth trying to breed more frequently.

If you’ve successfully witnessed your rabbits breeding, now the thing to do is get ready for babies and play the waiting game, of “is my rabbit pregnant.”  Here are some signs that will help you guess if she’s actually pregnant or not.  You’ll also want to make sure you are prepared with a nest box to put in her cage 28 days after breeding.  (Click here for instructions on making your own DIY nest box.)

It’s also a good idea to know what to expect before the babies arrive, so feel free to check out our post How To Care For Baby Bunnies.

Want a copy of our rabbit breeding tracker? Click here to get it included in the Farming My Backyard Printable Pack.

hello, after we witnessed the mating, all the usual activities, we separated them, then tried again in an hour and a half, to make sure. all they did was lay around. no activities. does this mean Yes they bred and are no longer interested?

If you saw the coupling happen, you're probably set. Now it's just the waiting to see if it sticks.

I have 2 females in one hutch and male seperate.. do I need to seperate the females or will they be okay together once bred in same hutch?

Yes, if they are only in a hutch they should be separated. If you wanted to keep them together they would need much more space so that each doe could have her own territory and places to get away from each other.

Thanks for useful information

I am trying to breed my 2 rabbits, my male is sometimes want to mate and other times not.(No successful breeding yet, and they are first timers) On the other hand my female will not let him breed. She will make a weird grunting sound and nip him. They are old enough to breed. Thoughts and options?

Make sure you are taking the female to the male's cage and supervise the whole time. If it's not successful try again once each day until she is receptive.

I am wondering if breeding and raising rabbits is something that I can do part time? Like on the side of school and work, will it be fairly easy to raise the bunnies or does it require a full time commitment?

You can absolutely do it part time. I recommend starting with just two does and one buck. It's a lot easier to add more rabbits if you find you want them than it is to start out with too many.