Do you ever feel discouraged?  Maybe you feel there isn’t any point in trying because it’s all just too much!  It’s too big, and you can do so little?  Why should you even start when think you will fail?  You know you should try your best, it’s still so hard to get moving sometimes! 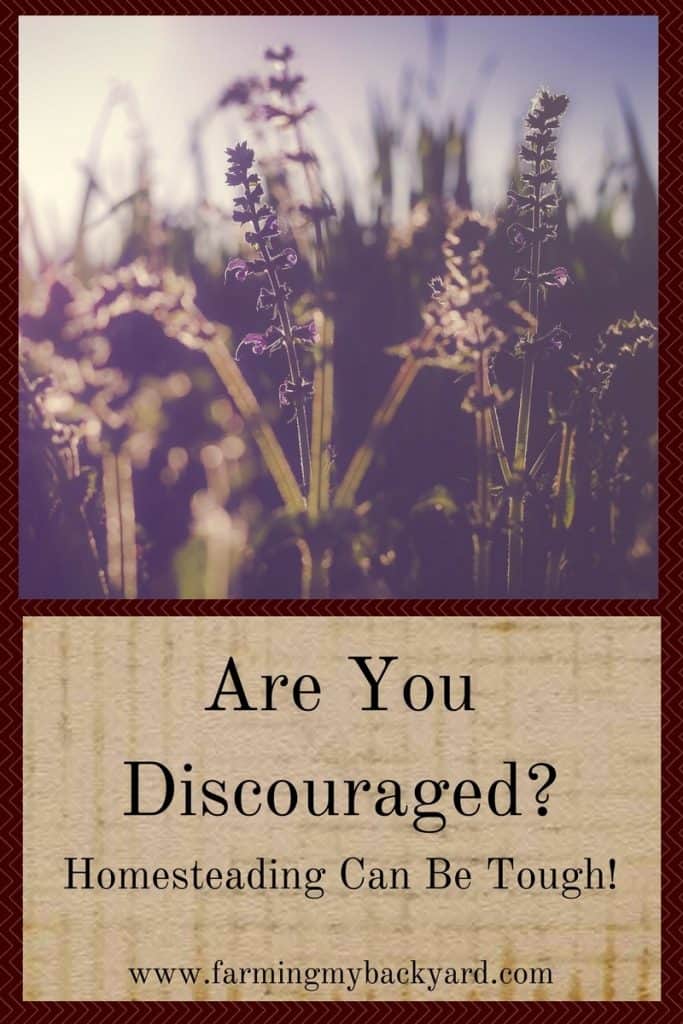 Sometimes we don’t know what we need to do.  Sometimes we know exactly what to do but we are afraid.  There’s something holding us back.  Sometimes it’s so easy to try and fail and try and fail.  Other times the tiniest though of failure is enough to scare us from even trying.

But The Lavender Didn’t Die

I have a black thumb.  It’s true!  I kill almost everything I plant.

When my husband and I moved into our first apartment we had a little balcony and I decided we needed some potted plants and flowers for our little balcony.   I bought pots and plants and potting soil and spent a few afternoons creating a mini-oasis on that tiny ledge.

The next spring I tried again, different balcony, different plants.  Almost every single plant died.  My tiny lavender plant, no more than a few sticks really, lasted all summer, managed not to drown that winter and grew ever so little the next spring.  I kept planting and plants kept dying.  I don’t know why I kept trying except that I knew I should grow some herbs and tomatoes or at lease something edible.

But the lavender, it kept growing, and I kept putting it into a bigger pot, until finally we purchased the house and I planted it in the yard, and it’s still alive.  It’s huge!  It’s thriving, happy, and covered with bees.

Sometimes trying something again and again until you get it right, is the way to get past disappointments and failures.

I recently had another feeling of failure when thinking about getting rid of my goats.  I tried to make it work, but ultimately decided that they just weren’t right for me on this property at this point in my life so I sold them to an awesome home who needed a companion for their older pet doe.  It was hard walking away from something, especially when I had invested so much time, money, education, and pure sweat into it.  But despite it not working out, I’m still better off for having the experiences.

Sometimes it’s really hard to know when you just need to persevere and when it’s actually time to quit.

Here is what to try when you are feeling discouraged:

Look At The Big Picture:

Why Stick With It?

Keeping my lavender alive for over ten years is quite an accomplishment for me, considering I’ve managed to kill just last year alone already established mint, echinacea, blackberries(!), brussels sprouts, chard, lettuce, kale, raspberries, blueberries, tomatoes, rhubarb, mushrooms, and potatoes.  The seeds I’ve planted that never really got going are too numerous to list.  Sometimes even when I manage to sprout something and it lives to bear fruit I manage to mess it up somehow.  Those tomato plants I got ripe fruit from for the first year ever?  Yeah, I tried canning tomato paste and every single jar went moldy.

But the lavender.  It’s still alive.  So something went right.  Every time you mess up you learn something.  Even though my family would be dying of starvation right now if we were trying to live off our land, I keep trying.  Because maybe someday I’ll figure it out.  Someday all these tiny steps will add up.  We can look back and see how far we’ve come.  Maybe each time we leave behind an ideal because it was just too idealized brings us closer to other ideals.

Because after all, the lavender didn’t die.

Great post, and so much how I am feeling lately. There is simply too much I am trying to accomplish with the homesteading, working, commuting, homeschooling, and changing careers...fear of failure is HUGE for me. And wanting to give up from sheer mental exhaustion and overwhelm.

I do a lot of the strategies you shared, and they help. It makes me feel better knowing I am not the only one who struggles. Thank you for your brave honesty!

Thanks! And don't give up!

I have noticed I fail several times in order to succeed as well! Sometimes quite frustrating, yes. I think your car/no car thing was a successful experiment. You tried it, and for now having a car is a good idea for your family. That's okay. We (my husband, me, and the now 15 month old) went down to two cars over a year ago... and before then the idea of having only one car was a stretch for us - crazy, huh? Now we lease one car and that works great for us right now. Someday, When my husband works from home instead of an office, our car needs may change. Anyway, I wanted to share with you how you have contributed to my life. Since reading your post about living without a refrigerator we have made lots of changes and so our fridge is always almost empty. This is a big change for us and I am excited to keep learning here. I thought our fridge was broken one day and I had this sense of confidence and pride that I knew what to do to preserve all the valuable food! It was nice to find out the fridge was fine, though. ;-) Thanks for blogging!

Thanks so much! I'm so excited to hear that I was able able to help and you didn't lose a bunch of food. That's good the fridge wasn't broken, broken appliances are not fun.

I guess it's true that our needs change as our lives change and what may work for one period may not be the best option for ever and all time. I guess I have that kind of attitude with my washing machine, I have the skills to live without it, but I sure like having one around. Now I just need to apply that same mindset to the car.

I understand the black thumb, but I keep trying. Don't get too down on yourself. Often it's two steps forward and one back, but at least you're trying. I agree on finding a gardening mentor. Of course I haven't taken that advice yet. Good luck!

Thanks! It's so true about the two steps forward and one step back.

I understand your concerns about the car. I don't really have that choice since we live so far out of town, but I am trying really hard to get rid of a lot of excess stuff and just live a more simple lifestyle and my husband is with me...but only to a point. Frustrating for sure, but I can only change me so that's what I try to stay focused on. Eventually he will come around...he always does :) but until that time I think on the positive changes that I have made in my life and just try to enjoy them for what they are. Also, I kill everything too and what I don't kill first my dogs eat :/ like the aloe vera plant and the rosemary. I haven't tried lavender, but just maybe I will :)

Yeah, my husband is a trooper, but the no car thing was the last straw for him. I haven't tried aloe vera yet, but I killed rosemary three times so far!

Hi, congrat with the lavender.... One thought on your post.... you speak about trying, so you experience.... for me is only one part of the equation... the other part is the theory (via a class, a book, internet, a more advance user or expert on the field I want to learn about). So should you take a mentor or an adviser for your garden ? I am sure someone will help you, and come to your garden and teach you... maybe an old lady or man around who will love to teach you and be connected with more young people and children... I also find that to be humble and ask for help is a form of connecting with our community and build new bound. We often forget that we are not alone ;) and plenty of opportunities are around us to connect with other human being. PS I agree each new garden it take some time to find the right type of plant, I have a green thumb and this year I got a new challenge in my new apartment which is north facing and after a while and for the first times of my life some plants died :-( I discovered the fantastic world of succulent plant....

Thanks. I've read a lot of books about gardening, but I love the idea of having a hands on mentor. My aunt is a good gardener, maybe I'll have to ask her for some advice and pointers. I agree! Having community is so important, sometimes I forget that!